This post looks at the opinions of Twitter users surrounding the first Presidential Debate. We look at content containing at least one debate hashtag, shared immediately before, during, and after the debate; and we determine the “stance” or opinion (for or against) of each tweet towards Biden and Trump. 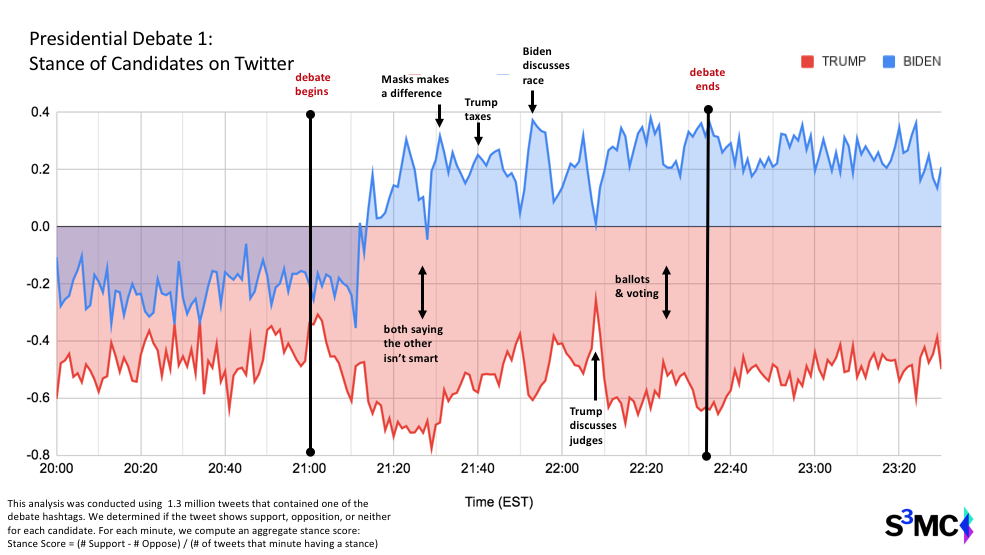 We see that in the hour before the debate begins, both candidates have a net negative stance. In other words, more opinions against each candidate are being shared than are opinions for each candidate. At around the 11 minute mark in the debate (roughly 21:11), pro-Biden expressions begin increasing, and continues to increase until the overall stance is in support of Biden. In contrast, around the same time, stance towards Trump decreases and continues to decrease for the first 10 minutes.

Over the course of the debate there are specific moments that help and hurt each of the candidates. When there is perceived bickering, there is usually a decline in stance for both candidates, although there are exceptions. The moment in which Trump received the most support was when he spoke about judges. Biden’s best moment was when he discussed race relations and the need to support black Americans.

It is worth noting that within an hour of the debate the expressed stance towards Trump returned to pre-debate levels. These are decidedly negative, of course; but the additional negative impact of the debate on Twitter discussion of Trump may have been short-lived. The same is not true for Biden. The hours surrounding the debate saw a marked shift in expressed stance towards Biden, from by-minute averages that were anti-Biden to clearly pro-Biden. The shift is evident only 10 minutes into the 90-minute debate, and durable for the hour following the debate as well.

Twitter is by no means an accurate representation of public opinion more broadly – we must be sure to interpret these results as indicating the debate impact on Twitter discussion, not the public writ large. That said, where Twitter is concerned it seems relatively clear that Biden ‘won’ the debate.

Information about the analysis:

This analysis was conducted using approximately 1.3 million tweets that contained at least of the debate hashtags. We collect posts using the Twitter Streaming API. We use the core debate hashtags for this analysis, e.g. #debates2020, #presidentialdebate2020, etc. We determine if the tweet showed support, opposition, or neither for each candidate. For each minute, we compute an aggregate stance score as follows: Stance Score = (# Support – # Oppose) / (# of tweets that minute having a stance). To determine the stance itself, we trained a BERT fined tune model with a single layer on 5 million posts related to election 2020. We also had three people label 1000 tweets with stance to further improve our model.