So-called “inflation truthers” – who claim that inflation is actually much higher than reported in the United States – have made recent news waves. Mainstream financial news organizations have debunked the charges of inflation truthers with the simple math of averages. But what if the truthers are just looking in the wrong place? That is, what if there is systematic bias not in reported inflation, but in projected inflation?

Enter the work of Cassandra Grafström, a Ph.D. candidate in the department of Political Science and affiliate of the Center for Political Studies (CPS). Grafström, along with Christopher Gandrud of the Hertie School of Governance, conducted research to trace potential partisan biases in inflation estimates.

In a paper which is forthcoming in Political Science Research and Methods, Gandrud and Grafström began with a widely accepted notion that under more liberal governments, the Federal Reserve tends to predict higher inflation. Why? Democratic administrations tend to try to lower unemployment, which causes higher inflation. Under more conservative governments, on the other hand, the Federal Reserve predicts lower inflation. Yet there exists little empirical support for these ideas. Instead, most work on inflation comes from the field of economics, with a focus on comparing federal predictions with money market predictions. 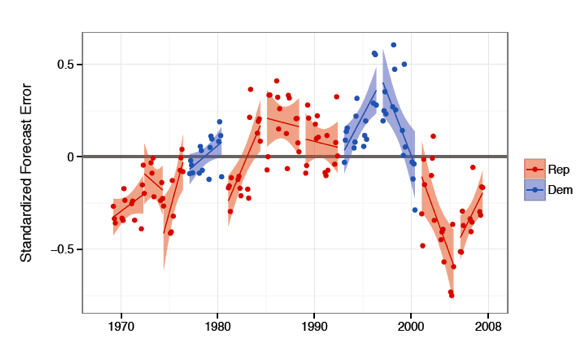 Grafström and Gandrud also wondered if control of Congress plays a role. To test this, they considered the joint influence of presidential party and the majority party in Congress. As the graph below shows, presidential party drives the trend. Interestingly, a Republican controlled Congress makes the original results stronger. That is, with a Democratic president and Republican Congress, there is greater over-estimation of inflation. Likewise, with a Republican president and Republican Congress, there is greater under-estimation of inflation. The graph below illustrates these findings (0 would again represent a match between predicted and actual inflation) 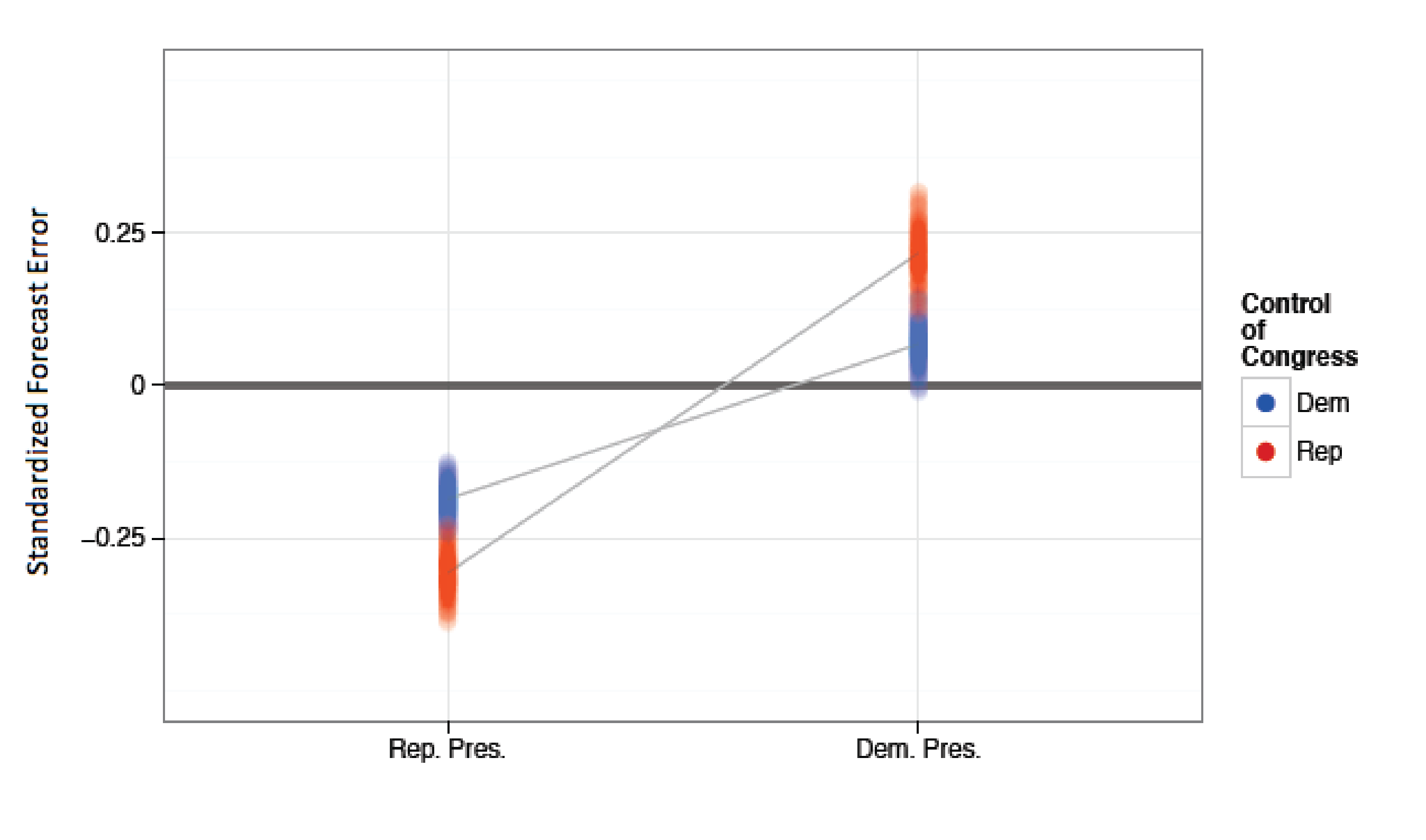 The following post elaborates on a presentation titled “Out of Options? Blacks and Support for the Democratic Party” that was delivered at the 2014 World Congress of the International Political Science Association (IPSA).

Hutchings and Jefferson especially sought to shed light on the “Black Utility Heuristic.” First proposed by Michael Dawson, the Black Utility Heuristic holds that Blacks tend to assess what is in the best interests of their racial group as a proxy for judging what are the best political decisions for them individually. So, given the widespread perception that the Democratic Party is best for African Americans, many Blacks support this party even if – in the case of the middle-class and social conservatives – it might not be in their individual interests to do so. But despite the reliance on this theory by numerous scholars, there exists little empirical support that it can account for Blacks’ lopsided support for the Democratic Party.

Using American National Election Studies (ANES) data, Hutchings and Jefferson tested the Black Utility Heuristic against other potential explanations for the near-unanimous support among Blacks for the Democratic Party.

The 2012 ANES pre-election survey includes 511 Black respondents. Using this survey, the authors report that 90% of African Americans identify as Democrats and 55% strongly so, compared to 39% and 11% of Whites. Yet, when the authors looked at a 7-point measure of ideology, only 47% of Blacks identify as liberal while 45% identify as conservative in the United States.

Given the mismatch between political ideology (measured using the liberal-conservative continuum) and partisanship, the authors turned to other ways to measure political ideology: egalitarianism, moral traditionalism, and ideal role of government. On egalitarianism and size of government, Blacks were indeed considerably more liberal than Whites; there was not significant difference between the groups on morality.

Despite the ideological underpinnings of these questions, they only weakly correlate with the standard measure of political ideology. The strongest correlation was between egalitarianism and political ideology – at just 0.18 Among Blacks, this correlation jumps to 0.42 for Whites. (Correlation coefficients give a measure of fit between two variables. If the two variables move up and down in concert, this is a perfect correlation of 1; if there is no connection the correlation is 0.) Further, support for bigger government was the only ideological measure that was a statistically significant predictor of partisanship, which may suggest a need to rethink how we conceptualize and measure ideology as it pertains to African Americans.

So could the Black Utility Heuristic offer the best explanation of the overwhelming support for Democratic candidates among Black voters? To test this, the authors looked at the connection between believing that what happens to other African Americans affects the survey respondent’s own life and Democratic affiliation. This connection was not significant, directly countering Dawson’s Black Utility Heuristic. On the other hand, an alternative measure assessing the importance of in-group racial identity predicted identifying as a Democrat among Blacks.

Hutchings and Jefferson thus conclude that African Americans do not vote Democrat because of their ideological identity as liberals, or because of notions of linked fate. Instead, strong support for activist government and the importance of in-group racial identity seems to drive this trend.

A fisher people’s association in the Philippines 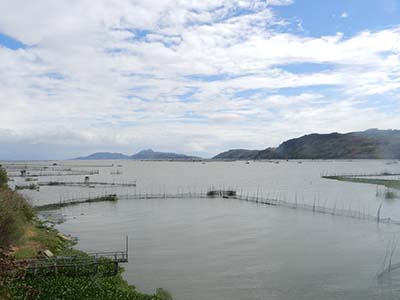 A fishing project in the Philippines

As covered in an earlier post, the population of the Philippines has skyrocketed from just 26,272,000 people in 1960 to 98,734,000 people in 2014, a growth rate of 254%. The limited size and resources of the Philippines limits employment opportunities for the adult population. Even professionals educated as teachers, nurses, physicians, and other health workers struggle to find work. Today, nearly 50% of the adult population is employed overseas in the Middle East, several Asian countries, and the United States. Young parents often leave their children with extended family and work overseas for many years.

Fishing is an important occupation in the Philippines for men and women. I visited a cooperative fishing community in Rizal Province and was impressed by the active participation of local community people in developing the fishing industry in Laguna Lake, home to fishing ponds for developing and testing fish for a variety of purposes. Several in this community were active in advancing legislation to promote the industry in a variety of ways.

The response to the weed menace of water lilies showcases the creativity and ingenuity of this community. They now cut the water lilies, dry them, and make them into a variety of projects such as mats for sleeping, slippers, and bags. They also have promoted the planting of mangroves along the ocean coasts of the Philippines to control water damage from typhoons. 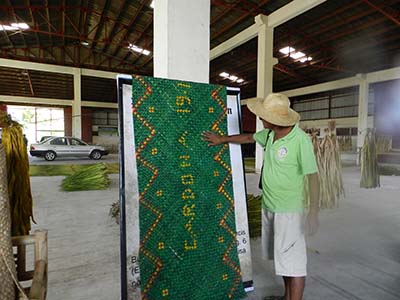 The fisher people’s association shows one avenue for securing better employment for the Philippines’ growing population. Another activity of the fisher people is the promotion of the planting mangroves in many the shoreline communities. These mangroves have been shown to be effective in reducing the water damage that these communities suffer because of typhoons.

Andreadis seeks to bring ANES model to elections in Greece

Ioannis Andreadis, a member of the Political Science faculty at Aristotle University of Thessaloniki, studies elections in Europe. With a grant from the Fulbright Scholar Program, Andreadis was recently in residence at the University of Michigan’s Center for Political Studies (CPS) to learn more about the American National Elections Studies (ANES). 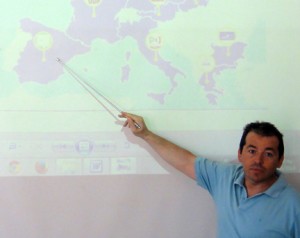 Andreadis started his academic career in 2007, after working as a computer scientist in his hometown’s municipality. His research focuses on elections, but the lack of a centralized database of election history in Greece presents obstacles to his work. With this in mind, Andreadis is interested to create a Greek version of the ANES – not only for the benefit of his own work, but for the benefit of other political scientists. Andreadis also plans to develop a centralized repository so that the data themselves can be easily disseminated to researchers.

A Greek version of the ANES faces some special challenges. Funding is limited in light of the country’s recent financial crisis. But this challenge has led to methodological innovation. Instead of relying on traditional data collection methods such as phone surveys, Andreadis has been developing web-based questionnaires. In 2007, 2009, and 2012, Andreadis ran such a web-based survey for the Hellenic (Greek) Candidate Study, and in 2012 he used his web survey infrastructure to collect data for a voter study which was organized as a mixed mode survey.

In addition to his interests in adapting ANES to the Greek political realm, Andreadis also combines his computer programming skills and interest in elections. Anreadis both designs and studies Voting Advice Applications (web-based platforms that aim to inform citizens about the electoral process, with emphasis on the positions of candidates and parties on issues related to electoral competition). In particular, Andreadis created and oversees the Voting Advice Application HelpMeVote, which was used by more than 480,000 voters during the May 2012 Greek Parliamentary Elections. HelpMeVote has also been used in Albania, Iceland, and during the 2014 elections for the European Parliament.

CPS and ANES are thrilled to have have had Andreadis visit, and look forward to the progress of his initiatives in support of election studies and political science research in Greece and beyond.