Trading hard hats for combat helmets: The economics of rebellion in eastern Ukraine

Post developed by Yioryos Nardis in coordination with Yuri Zhukov.

In March and April 2014, angry mobs and armed men stormed administrative buildings and police stations in eastern Ukraine. Waving Russian flags and condemning the post-revolutionary government in Kyiv as an illegal junta, the rebels proclaimed the establishment of ‘Peoples’ Republics’ of Donetsk and Luhansk, and organized a referendum on independence. Despite initial fears that the uprising might spread to other provinces, the rebellion remained surprisingly contained. While 61% of municipalities in Donetsk and Luhansk fell under rebel control during the first year of the conflict, just 20% experienced any rebel violence. What explains these local differences in rebellion across eastern Ukraine? Why have some towns remained under government control while others slipped away? Why might two municipalities in the same region experience different levels of separatist activity?

The latest research by Yuri Zhukov, faculty member in the Center for Political Studies and Assistant Professor of Political Science, uses new micro-level data on violence and economic activity in eastern Ukraine to examine these questions. In the paper “Trading hard hats for combat helmets: The economics of rebellion in eastern Ukraine” (forthcoming in the Journal of Comparative Economics) Zhukov evaluates two prominent explanations on the causes and dynamics of civil conflict in eastern Ukraine: ethnicity and economics.

Identity-based explanations expect conflict to be more likely and more intense in areas where ethnic groups are geographically concentrated. According to this view, the geographic concentration of an ethnolinguistic minority – in this case, Russians or Russian speaking Ukrainians – helps local rebels overcome collective action problems, while attracting an influx of fighters, weapons and economic aid from co-ethnics in neighboring states.

According to economic explanations, as real income from less risky legal activities declines relative to income from rebellious behavior, participation in the rebellion is expected to rise. This framework maintains that violence should be most pervasive in areas potentially harmed by trade openness with the EU, austerity and trade barriers with Russia.

Zhukov finds that local economic factors are much stronger predictors of rebel violence and territorial control than Russian ethnicity or language. Pro-Russian rebels in Ukraine are “pro-Russian” not because they speak Russian, but because their economic livelihood depends on trade with Russia.

The study uses new micro-level data on violence, ethnicity and economic activity in the Donbas region of eastern Ukraine, to understand how these two explanations are related to rebel violence and territorial control. The spatial units are 3037 municipalities (i.e. cities, towns, villages) in Donetsk and Luhansk provinces. For each municipality, Zhukov estimated the proportion of the local labor force employed in three industries: machine-building (which is heavily dependent on exports to Russia), metals (less dependent on Russia, and a potential beneficiary of increased trade with the European Union), and mining (vulnerable to International Monetary Fund-imposed austerity and cuts in state-subsidies). He also calculated the proportion of Russian speakers in each locality.

Rebel violence data are based on human-assisted machine coding of incident reports from multiple sources, including Ukrainian and Russian news agencies, government and rebel press releases, daily ‘conflict maps’ released by both sides, and social media news feeds. This yielded 10,567 unique violent events in the Donbas, at the municipality level, recorded between the departure of President Viktor Yanukovych in February 2014 and the second Minsk ceasefire agreement of February 2015. To determine territorial control, particularly whether a populated place was under rebel or government control on a given day, Zhukov used three sources: official daily situation maps publicly released by Ukraine’s National Security and Defense Council (RNBO), daily maps assembled by the pro-rebel bloggers ‘dragon_first_1’ and ‘kot_ivanov’, and Facebook posts on rebel checkpoint location. 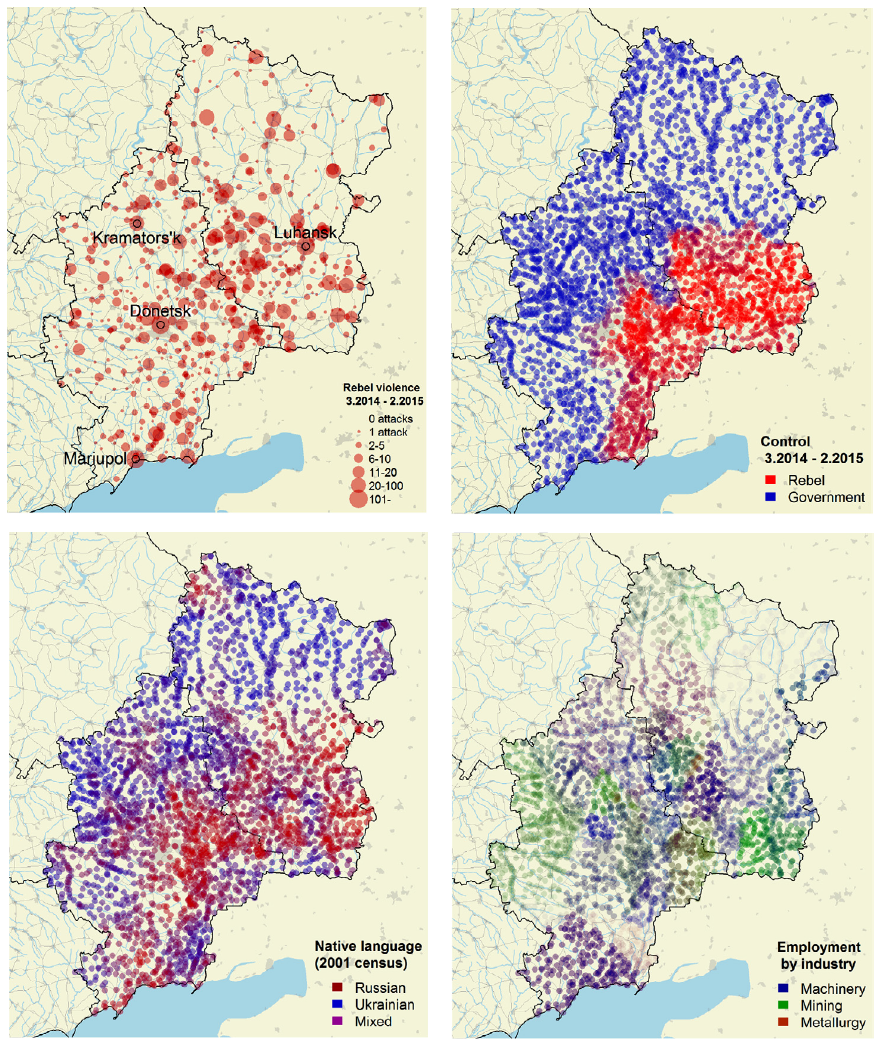 To evaluate the relative explanatory power of ethnic and economic explanations of violence in the Donbas, the study uses Bayesian Model Averaging. It finds that a municipality’s prewar employment mix is a better predictor of rebel activity than local ethnolinguistic composition. Municipalities more exposed to trade shocks with Russia experienced a higher intensity of rebel violence throughout the conflict. Municipalities where machine-building represented a small share of local employment (2%, the lowest in the data) were 38% less likely to experience violence than municipalities where the industry was more dominant — and the local population more vulnerable to trade disruptions with Russia. Such localities also fell under rebel control earlier – and took longer for the government to liberate – than municipalities where the labor force was less dependent on exports to Russia. On any given day, a municipality with higher-than-average employment in the beleaguered machine-building industry (26%) was about twice as likely to fall under rebel control as a municipality with below-average employment in the industry (4%).

By contrast, ethnicity and language had no discernible impact on rebel violence. Municipalities with large Russian-speaking populations were more likely to fall under rebel control, but only where economic dependence on Russia was relatively low. In other words, ethnicity only had an effect where economic incentives for rebellion were weak.

The seemingly rational economic self-interest at the heart of the conflict stands in sharp contrast with the staggering costs of war. In the twelve months since armed men began storming government buildings in the Donbas, over 6000 people have lost their lives, and over a million have been displaced. Regional industrial production fell by 49.9% in 2014, with machinery exports to Russia down by 82%.Suffering heavy damage from shelling, many factories have closed. With airports destroyed, railroad links severed and roads heavily mined, a previously export-oriented economy has found itself isolated from the outside world.