Can Democracy Survive? The 2021 Miller-Converse Roundtable

The theme of the roundtable presented on April 8, 2021, was “Can Democracy Survive?” Ken Kollman introduced the event, noting that the survival of democracy was a question that Miller and Converse worried about. Their ambition was to study survey respondents and political parties and candidates much like other scientists studied cells and atoms and planets, but they cared about the fate of democracy. Their legacy of scientific inquiry into politics and society continues at ISR and CPS. A recording of the event is available below. 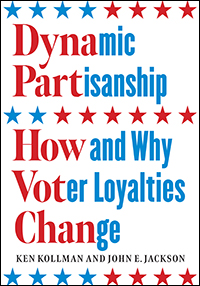 Ken Kollman examines partisanship in a forthcoming book written with John E. Jackson, Dynamic Partisanship: How and Why Voter Loyalties Change. The book, from University of Chicago Press, presents a framework that relates the changes that political parties undergo, and the partisanship of the electorate in four countries: the United States, the United Kingdom, Canada, and Australia.

Political parties are changing and adopting new issue positions, says Kollman, and the mass public pays attention to these movements. Both partisanship and voting decisions respond to the people’s evaluations of these partisan positions relative to their own interests.

Kollman makes the case that both major parties in the United States are perceived to have moved away from the center since 2008. These patterns include a continuation of the shift of the working class towards the right and the Republicans the shift of more educated voters to the left and the Democrats. These shifts have consequences for politics and for the survival of democratic processes.

Most people in the US hold their partisanship for life, but notable portions of the electorate change over the course of their lifetime. The most common reason they change is that they perceive the major parties as moving away from them or toward them on issues of fundamental importance, including economics and racial liberalism. They change much less often because of the performance of a party in office or because they change their ideology or issue preferences.

In The American Voter, Miller and Converse wrote about partisanship as a result of socialization; they argued that partisanship shapes the perceptions of events, of candidates, and the vote. Kollman and Jackson don’t necessarily argue with this. The American Voter portrayal of partisanship remains robust and is good at predicting the vote. In contrast, Kollman and Jackson focus on the dynamics of partisanship and how partisanship changes. Group memberships based on interests and elements of socialization determines partisanship. It’s malleable and they model it as a form of what’s called Bayesian updating, a method of modeling how people incorporate new information in their decisions. 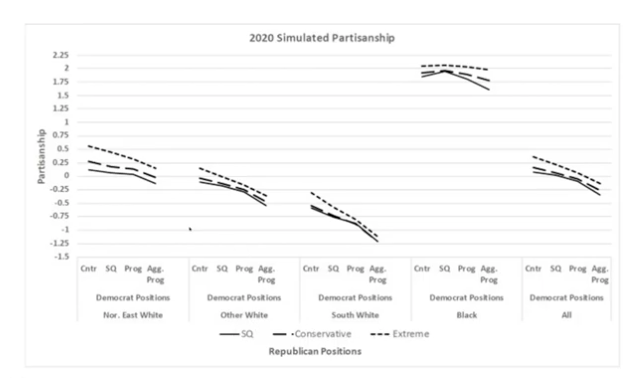 The trends of both parties away from the political center are worrisome for many people. Extreme party positions, including the pursuit of extralegal strategies to either pass policies or hold and maintain power, could become more likely as parties become more extreme.

What explains the rise of far-right nationalist-xenophobic and rightwing populism in the United States and other developed demoocracies? Robert Franzese presented research to address this question.

Scholars have noted that the rise of anti-immigrant, anti-globalization, anti-elite, anti-government sentiments correspond to a sea-shift of white working class voters to the right. One explanation for this shift is the notion that people have been left behind socioeconomically, and experience angst as a result. While support for parties farther to the right increased everywhere, it is especially notable in regions experiencing economic hard times, demonstrating support for these economic explanations of voting behavior.

Surveys have examined whether the shift to the right was attributable to socioeconomic malaise and decline, or whether it was due to cultural status threat. The data from these surveys seem to suggest that the political shift resulted from preceved xenophobic threats and it doesn’t have anything to do with the economic conditions.

However, Franzese contends that this conclusion is both wrong and wrong-headed. Instead of either/or explanations for political shifts, he suggests that we think in terms of both/and. Both neighborhood socioeconomic malaise and xenophobic anxiety associated with cultural change are both part of a broader sense of socioeconomic and cultural threat, as described in the graphic below. Franzese emphasized the importance of heterogeneity of perceptions. Some people are more susceptible to demagogic railing against the elite, the media, and foreigners. Other people will be immune, and may even become more repulsed by populist appeals. 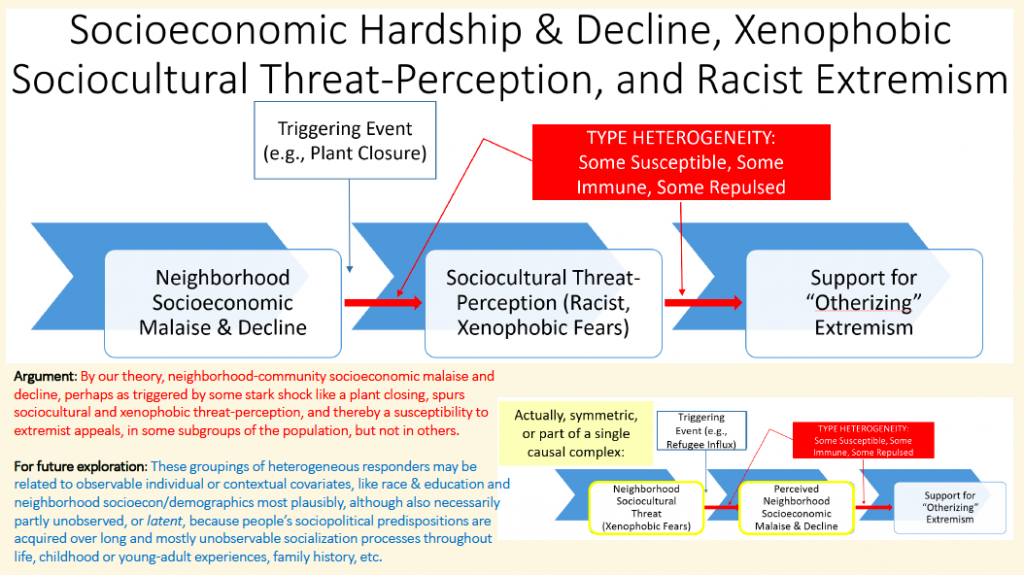 This approach shows that the socioeconomic conditions the individual experiences are partly contributing to social-cultural threat perceptions that produce support for extremism. It’s not just economic hardship that creates the response, but economic hardship contributes to the sense in some respondents that their group is being left behind.

Extremism, especially far-right extremism, is a rising threat to democratic society. Therefore, understanding better the provenance of this rising far-right extremism and concomitant rise in rightwing populism is urgently essential. Casting the possible causal processes as some xenophobic or socioeconomic threat perception is unhelpful. These processes are better understood as complementary.

Pauline Jones notes that many people think that democracy is either unlikely or impossible and due to familiar tropes that Islam and democracy are somehow incompatible.However she contends that democracy and Islam are not incompatible at all. Muslim democracies exist all around the world. Several Muslim-majority countries have transitioned to democracy in the latter half of the 20th cenury, and there are Muslim-majority democracies in multiple diverse regions across the world.

Survey research shows popular support for democracy among Muslims, and that Muslims are mostly supportive of democracy as a form of government, and they do not view democracy as incompatible with their religious principles or institutions. Furthermore, democracy itself is in a constant state of struggle to survive. Jones describes democracy not as an outcome, but a process toward resilience. Democracies are constantly undergoing a test of vitality.

To measure the level of democracy, Jones uses the Varieties of Democracy Electoral Democracy Index (DDI). This score focuses on the role of elections as the core feature of democracy, and includes aspects of the political system that increase the likelihood that elections will result in democratic outcomes. She then created a typology based on the dimensions of duration and trajectory, which describes four modes of democratic survival, depicted in the graphic below. Democracies are grouped into categories including striving, thriving, waning, and backsliding.

Jones investigated eight Muslim majority countries and fit them to these modes: Albania, Malaysia, Mali, Tunisia, Indonesia, Senegal, Kyrgystan, and Turkey. She found, surprisingly, that for that most of the Muslim-majority countries in the sample were striving are thriving. 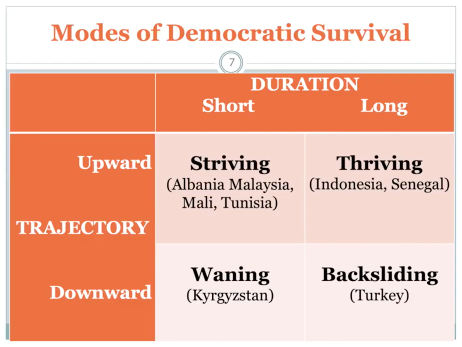 The key takeaway from this research is that democracy is an ongoing struggle to survive. Jones challenged the audience not to think about democracy as meeting some threshold, but rather as a sort of ongoing struggle, and to think about it as varying degrees of vitality, as opposed to focusing on the mortality of democracy. This, she concludes, allows us to have some degree of cautious optimism. Democracy faces constant challenges; survival is just a matter of the degree of the threat and the strength of the institutions meeting that threat.

“If They Only Knew”: Informing Blacks and Whites about the Racial Wealth Gap

Vincent Hutchings delivered the inaugural lecture of the Hanes Walton Jr. Collegiate Professorship in Political Science and Afroamerican and African Studies on March 31, 2021. 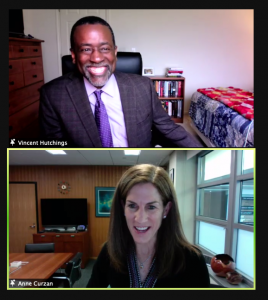 Vincent Hutchings and Anne Curzan at the inaugural lecture on March 31, 2021.

Swedish economist Gunnar Myrdal, the author of the landmark study An American Dilemma, believed that education was the key to racial progress. Myrdal wrote “There is no doubt, in the writer’s opinion, that a great majority of white people in America would be prepared to give the Negro a substantially better deal if they knew the facts.”

Vincent Hutchings began his inaugural lecture of the Hanes Walton Jr. Collegiate Professorship in Political Science and Afroamerican and African Studies by citing this quote, and immediately calling it into question. Is it true that policies aimed at alleviating the racial wealth disparities would gain more support if only whites knew the true extent of the gap?

A noteworthy aspect of the recent protests against police brutality and racial inequality has been the extent to which white Americans were participants in greater numbers than in the past. Even before the events of 2020, numerous surveys show whites becoming more racially progressive and acknowledging the reality of racial bias against Blacks. But does that mean that whites will support policies to reduce racial disparities? Professor Hutchings suggests that this is an example of a principle-policy gap; whites are prepared to acknowledge that injustice exists in principle, but they may not be willing to support redistributive policies.

The research team posited that the way the information was framed would be important. Past studies and media headlines about wealth disparities tend to frame the issue in terms of Black disadvantage. It’s less common to see a focus on the ways whites are advantaged.

If the study participants were informed about the wealth gap, but did not change their support for policies to address it, perhaps the treatments were not strong enough? In open-ended questions in the first study, some participants responded that they believed the wealth gap existed because whites worked harder than Blacks. To address these issues, the research team launched a second study in March 2021, building on the first study and specifically highlighting the limited impact of education on reducing the racial wealth gap.

Whites across the ideological spectrum are informed by the treatments in the second study. Surprisingly, the additional information about education was less effective than the general population frames.

Again, the results showed that a better understanding of the racial wealth gap does not make participants more progressive on racial policies. However, those in the first treatment group (receiving information framed in terms of Black disadvantage) showed mild increase in support for reparations.

Surprisingly, white liberals in the fourth treatment group (receiving information about the wealth gap and education, with a frame of white advantage) had a threat response to the treatment. When responding to questions about competition for jobs and political influence, white liberals in the fourth treatment group perceived more competition between racial groups. They responded to questions about racism, such as whether whites have greater wealth because they are naturally superior and whether the use of racial epithets by whites was acceptable, in less progressive ways.

These studies show the limits of providing information about racial disparities. People are not necessarily persuaded to close the gaps when they know more about them. When asked if he was discouraged by the outcome of the studies, Professor Hutchings said that as an educator, he is an optimist. He said that he is motivated by his students to keep asking questions about political opinions and behavior. Hutchings and his students will field new surveys to further examine these questions in the fall of 2021.