Donald Kinder Elected to the National Academy of Sciences

Earlier this year, the National Academy of Sciences (NAS) announced the election of the Institute for Social Research’s Donald Kinder, the only University of Michigan professor to be named in 2017 and the 28th professor to be named in U-M’s history. Established by Congress in 1863, the private, non-profit NAS promotes science through its consortium of more than 2,000 distinguished scholars, of which nearly 500 have won Nobel Prizes. NAS serves as  an independent advising entity to the government, and provides recommendations and guidance on matters of scientific or technological importance to the nation.

“It is a thrilling surprise to be elected to the National Academy of Sciences,” says Kinder. “I was very pleased when I received the call about my election, and I look forward to working with members on a variety of new projects.” As a member, Kinder will attend NAS membership meetings and help review papers for the multidisciplinary journal, Proceedings of the National Academy of Sciences, as well as provide his expertise on subject-related projects or efforts.

Kinder, a Research Professor at ISR’s Center for Political Studies, is notable for his research on prejudice and how it impacts contemporary American politics. “Most of my work over the last 20 years has focused on racial politics in the United States, as I’ve tried to understand the foundations of public opinion and the role that race plays in elections,” says Kinder. “This area of study has been a long-standing interest of mine that actually started in graduate school. I was in a specific time in a specific place at UCLA in the early 1970s and I became interested in how white suburban voters were affected by the racial identity of one of the mayoral candidates.”

More recently, Kinder’s work has revolved around ideology in the study of American politics and his newest book, Neither Liberal Nor Conservative, debuted in May. “This book is about American politics and how American elites seem highly ideological yet most American citizens are not,” says Kinder. “This is a condition that has been present over the past 50-60 years. In some ways, it’s a surprising argument to make because people who study politics and think about politics usually make the presumption that ordinary people think deeply about politics, too. But the reality is that regular citizens have better things to do with their lives and, as a consequence of that, their thinking is more casual and less organized and certainly less ideological.” The book, written with Louisiana State University professor, and U-M grad, Nathan Kalmoe has received several long-form journalism reviews including in VOX and Washington Monthly.

As Kinder reflects on both his current work and his new election to NAS, he says, “I’ve been at U-M for going on 40 years and what I love about the place is the endless parade of super smart graduate students who come through. I think of my election to the National Academy of Sciences as a reflection of this remarkable place, my great colleagues and wonderful students.”

The Politics of Latinidad

This fall, a group of 24 University of Michigan undergraduate students sought to explore this disparity and pinpoint what, if anything, works to increase Latino political participation. In the class, entitled The Politics of Latinidad, CPS Faculty Associate and U-M Political Science Professor Mara Ostfeld taught her students how to measure public opinion and challenged them to analyze the factors that affect Latino political participation.

Today, more than 50,000 Latinos live in Detroit and a majority of them reside in City Council District 6 in Southwest Detroit which is precisely where this course focused. The students began by studying the history of Latinos in Southeast Michigan and exploring how Latinos played critical roles in the city’s development dating back to before World War I. They analyzed broad trends in Latino public opinion, and considered how and why these patterns might be similar or different in Detroit. Students then designed their own pre-election polls to take into the field.

In order to understand what affects voter turnout, students surveyed over 300 residents of Southwest Detroit to measure the issues that were most important to them. 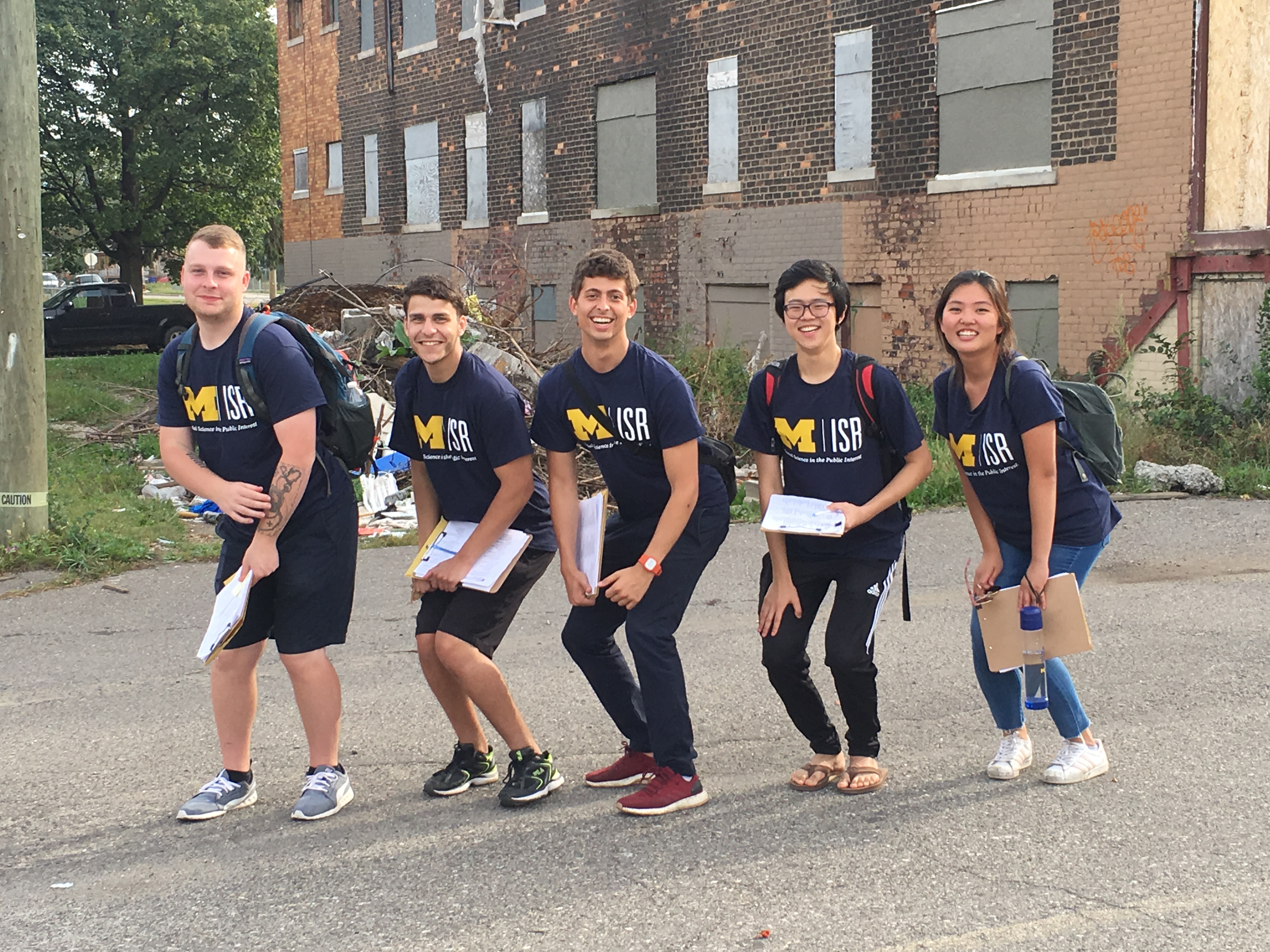 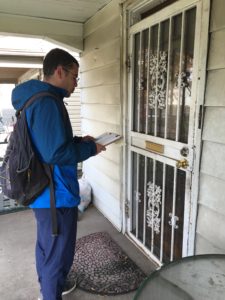 Local issues were also at the forefront of residents’ minds. Latinos had mixed views on the city’s use of blight tickets to combat housing code violations, with one third of respondents supporting them and one third opposing them.

As local organizations, like Michigan United, continue trying to get a paid sick leave initiative on the ballot in 2018, they can expect strong support among Latinos in Southwest Detroit. About two out of every three Latinos in the area indicated they would be more likely to support a candidate who supports the paid sick leave requirement.

The students then followed up with the residents a month later to see if they planned to vote in the upcoming city council election. At this point, the students implemented some interventions that have been used to increase political participation like, evoking emotions that have been shown to have a mobilizing effect, framing voting as an important social norm, and speaking with voters immediately before an election. With the election now over, students are back in the classroom analyzing the effectiveness of these interventions and will use their first-hand experience to better understand public opinion and political participation.

There is a long, documented history of large opinion gaps along racial/ethnic lines regarding U.S. military intervention and humanitarian assistance. For example, some research suggests that since minorities are most likely to bear the human costs of war, African Americans and Latinos might be more strongly opposed to foreign intervention. Additionally, research conducted during the Iraq war found that the majority of African Americans didn’t support the war effort because they believed that they would be the ones called upon to do the “fighting and dying” and that the war would tie up resources typically used for domestic social welfare programs, programs upon which the group depends.

One obvious explanation for these opinion gaps is simple group interest. Americans are more likely to intervene to protect the lives and human rights of victims of humanitarian crises or genocides when the victims are “like us” and this narrow racial or ethnic group interest may be what drives racial/ethnic differences in support for foreign intervention or immigration policy in the U.S. This is important because public support for military and humanitarian interventions is crucial to not only the quantity of aid but also its quality and effectiveness.

But this simple in-group, material interest explanation doesn’t always hold up empirically. African Americans were more protective of the rights of Arab Americans after 9/11, even though they perceived themselves to be at higher risk from terrorism.

In a new paper, presented at the 2017 APSA annual meeting, Cigdem V. Sirin, Nicholas A. Valentino, and José D. Villalobos examine variations in political attitudes across three main racial/ethnic groups — Anglos, African Americans, and Latinos — regarding humanitarian emergencies abroad. The researchers tested these differences using their recently developed “Group Empathy Theory” which states that “empathy felt by members of one group for another can improve group-based political attitudes and behavior even in the face of material and security concerns.” Essentially, the researchers predict that a domestic minority group can empathize with an international group experiencing hardship, even when the conflict doesn’t involve the domestic group at all and when extending help oversees is costly.

The researchers tested their theory with a national survey experiment that assessed support for pre-existing foreign policy attitudes about the U.S. responsibility to protect, foreign aid, the U.S. response to the Syrian civil war, as well as the Muslim Ban proposed by Donald J. Trump.

Next, to measure opinions about the U.S. ability to protect, they provided participants with a pair of statements about the role the U.S. should plan in international politics. The first statement read: “As the leader of the world, the U.S. has a responsibility to help people from other countries in need, especially in cases of war and natural disasters.” The second statement was the opposite — denouncing such responsibility to protect. Their results show that African Americans and Latinos are likely to attribute the U.S. higher responsibility to protect people of other countries in need as compared to Anglos. Furthermore, when asked about their opinion on the amount of foreign aid allocated to help countries in need, Latinos and African Americans were more strongly in favor of increasing foreign aid and accepting Syrian refugees than were Anglos.

The researchers further examined potential group-based difference in policy attitudes regarding Trump’s controversial “Muslim ban” which called for a total and complete shutdown of Muslims entering the United States. Again, both Latinos and African Americans exhibited significantly higher opposition than Anglos to the exclusionary policy targeting a specific group solely based on that group’s religion.

Further analyses also supported the researchers’ claims that group empathy is a significant mediator of these racial gaps in support for humanitarian aid and military intervention on behalf of oppressed groups oversees.

This research brings into focus some of the dynamics that shape public opinion of foreign policy. Given the role of the public in steering U.S. leadership decisions, especially as the current administration seeks to implement deep cuts to foreign aid, investigating the role that group empathy plays in public responses to humanitarian emergencies has important broader implications, particularly concerning U.S. foreign policy and national security.