Update on the the ANES 2020 Time Series Study

In every U.S. presidential election since 1948, the American National Election Studies (ANES) has conducted pre- and post-election surveys of a large representative sample of American voters. ANES participant interviews looked different in 2020 than they did in the past; the COVID19 pandemic made traditional face-to-face interviews impractical and risky. The study team began planning for the extraordinary circumstances in March, without any idea what the conditions would be when interviews began in August. The team pivoted nimbly to redesign the study even as the onset of data collection approached.

The majority of interviews in 2020 were completed as web surveys, some following an online format similar to one used in 2016, and others using an innovative mixed-mode design. Respondents to the mixed-mode surveys were randomly assigned either to complete the questionnaire by themselves online, or to take the survey with a live interviewer via a Zoom video link. Few surveys conduct live video interviews, but the ANES study team felt that it was critical to explore the use of this technology as a potential means of balancing issues of cost, continuity, and data quality.

To answer online surveys, respondents must have reliable access to the Internet and comfort using computers. Under normal circumstances, people without access to computers or the Internet in their homes can gain access in public settings like libraries or at their workplace. With many of these places closed due to the pandemic, online access became a bigger challenge. In mixed-mode cases where it was difficult to complete a web or video interview, interviewers contacted the respondents to secure a phone interview. Providing phone interviews helped the team strengthen sample quality by reaching respondents without access to the Internet as well as those who are less comfortable using computers.

Data collection for the 2020 surveys, out of necessity, departed significantly from the practices of the past 70 years of the ANES. The study team will continue to monitor and address the implications of these changes. In the end, the team was pleased to field a very high quality survey with relatively high response rates, thoroughly vetted questions, and the largest sample in the history of ANES.

Pre-election interviews began in August 2020. The pre-election questionnaire is available on the ANES website. The questionnaire includes time series questions dating back to the earliest days of the ANES survey, as well as new questions that reflect more recent developments in the study of American politics. The ANES team must always be prepared to add a few questions late in the design process to capture substantial developments in the presidential campaign or American society. In 2020 the survey added questions about election integrity, urban unrest, and COVID-19, among other topics.

The investigators, ANES staff, and their survey operations partners at Westat monitored the data collection closely, in case further adjustments in procedures or sample were required. The final pre-election sample consists of over 8,200 complete or sufficient-partial interviews. This includes a reinterview panel with the respondents from the ANES 2016 Time Series. Over 2,800 respondents from the 2016 study were reinterviewed, more than three quarters of the original group.

ANES staff will continue to review and clean the data into the new year, including checks of respondent eligibility that may alter the final sample in modest ways. Pending this review, the team expects response rates to come in slightly below the 2016 web response rates.

Overall, despite the challenges of this past year, the ANES study team was able to gather robust data from a large probability sample of Americans, extending the longest-running, most in-depth, and highest quality survey of US public opinion and voting behavior, at a critical juncture for American society and democracy. The team will continue to share updates, here and on the ANES website, as data from this survey become available.

Religion’s Sudden Decline: Why It’s Happening and What Comes Next

By Ronald F Inglehart, Amy and Alan Lowenstein Professor Emeritus of Democracy, Democratization and Human Rights, and Research Professor Emeritus at theCenter for Political Studies. Professor Inglehart is the author of the forthcoming book Religion’s Sudden Decline: Why It’s Happening and What Comes Next.

Research note: Data originally used in this book overstated the degree to which the importance of God had declined among the American public. None of the overall conclusions change because of these errors. Read the research note “Religion’s Sudden Decline, Revisited.” 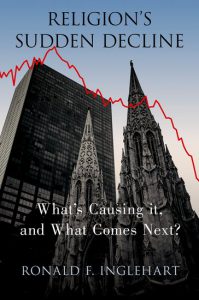 As the 21st century began, religion was spreading rapidly. The collapse of communism had left a psychological vacuum that was being filled with resurgent religion, fundamentalism was a rising political force in the United States, and the 9/11 attacks drew attention to the power of militant Islam. There were claims of a global resurgence of religion.

An analysis of religious trends from 1981 to 2007 in 49 countries containing 60% of the world’s population did not find a global resurgence of religion—most high-income countries were becoming less religious—however, it did show that in 33 of the 49 countries studied, people had become more religious (Norris and Inglehart, 2011). But since 2007, things have changed with surprising speed. From 2007 to 2020, an overwhelming majority (43 out of 49) of these same countries became less religious. This decline in belief is strongest in high-income countries but it is evident across most of the world (Inglehart, 2021).

A particularly dramatic shift away from religion took place among the American public. For years, the United States had been the key case demonstrating that economic modernization need not produce secularization. But recently, the American public has been moving away from religion along with virtually all other high-income countries—in fact, religiosity has been declining more rapidly in the US than in most other countries.

Several forces are driving this trend but the most powerful one is the waning grip of a set of beliefs closely linked with the imperative of maintaining high birth rates. For many centuries, most societies assigned women the role of producing as many children as possible and discouraged divorce, abortion, homosexuality, contraception, and any other sexual behavior not linked with reproduction. Virtually all major world religions encouraged high fertility because it was necessary, in the world of high infant mortality and low life expectancy that prevailed until recently, for the average woman to produce five to eight children in order to simply replace the population. Religions that didn‘t emphasize these norms gradually disappeared.

A growing number of countries have now attained high life expectancies and drastically reduced infant mortality rates, making these traditional cultural norms no longer necessary. This process didn’t happen overnight. The major world religions had presented pro-fertility norms as absolute moral rules and firmly resisted change. People only slowly give up the familiar beliefs and societal roles they have known since childhood, concerning gender and sexual behavior. But when a society reaches a sufficiently high level of economic and physical security, younger generations grow up taking that security for granted and the norms around fertility recede. Ideas, practices, and laws concerning gender equality, divorce, abortion, and homosexuality are now changing rapidly. Almost all high-income societies have recently reached a tipping point where the balance shifts from pro-fertility norms being dominant, to individual-choice norms being dominant.

Several other factors help explain the waning of religion. In the United States, politics explains part of the decline. Since the 1990s, the Republican Party has sought to win support by adopting conservative Christian positions on same sex marriage, abortion, and other cultural issues. But this appeal to religious voters has had the corollary effect of pushing other voters, especially young liberal ones, away from religion. The uncritical embrace of President Donald Trump by conservative evangelical leaders has accelerated this trend. And the Roman Catholic Church has lost adherents because of its own crises. A 2020 Pew Research Center survey found that an overwhelming majority US adults were aware of recent reports of sexual abuse by Catholic priests, and most of them believed that the abuses were “ongoing problems that are still happening.” Accordingly, many US Catholics said that they have scaled back attendance at mass in response to these reports.

Although some religious conservatives warn that the retreat from faith will lead to a collapse of social cohesion and public morality, the evidence doesn’t support this claim. Surprising as it may seem, countries that are less religious actually tend to be less corrupt and have lower murder rates than religious ones.

In early agrarian societies, when most people lived just above the survival level, religion may have been the most effective way to maintain order and cohesion. But as traditional religiosity declines, an equally strong set of moral norms seems to be emerging to fill the void. Survey evidence from countries containing over 90%of the world’s population indicates that in highly secure and secular countries, people are giving increasingly high priority to self-expression and free choice, with a growing emphasis on human rights, tolerance of outsiders, environmental protection, gender equality, and freedom of speech.

As societies develop from agrarian to industrial to knowledge-based, growing existential security tends to reduce the importance of religion in people’s lives and people become less obedient to traditional religious leaders and institutions. That trend seems likely to continue, but pandemics such as the current one reduce peoples’ sense of existential security. If the pandemic were to endure for decades, or lead to an enduring Great Depression, the theory underlying this article implies that the cultural changes of recent decades would reverse themselves.

That’s conceivable but it would run counter to the trend toward growing prosperity and rising life expectancy that has been spreading throughout the world for the past 500 years. This trend rarely reverses itself for long because it is driven by technological innovation which, once it emerges, usually persists and spreads. If that happens, the long-term outlook is for public morality to be less determined by traditional religions, and increasingly shaped by the culture of growing acceptance of outgroups, gender equality, and environmentalism that has been emerging in recent decades.