ICYMI (In Case You Missed It), the following work was presented at the 2019 Annual Meeting of the American Political Science Association (APSA).  The presentation, titled “Breeding Contempt: Whites’ Reactions to Police Violence against Men & Dogs” was a part of the session “Race and Politics: New Theoretical and Methodical Insights v. Old Paradigms” on Thursday, August 29, 2019.

Of 987 individuals killed by police officers’ use of fatal force in 2018, 209 were black, and, of those, 200 were black men. The targeting and killing of unarmed black men has become a point of interest for news cycles and social movement organizations alike and is indicative of a fraught relationship between communities of color and police. With increasing press coverage over the past decade, academics have also begun to focus on the intertwining relationship between police use of force and race, complementing a long-standing literature which links blacks to perceptions of criminality, violence, and hostility. One area that is not well-developed, however, is how news coverage of police shootings influences attitudes towards police and policies related to policing for white Americans.

Building from research on race, media coverage, and policing, new research by Nicole Yadon and Kiela Crabtree examines reactions to police and policing by white people after they read about a police officer shooting a white man, a black man, or a dog. They find that news reports about police shootings change attitudes about police, but the strength of the reaction varies depending on who the victim is.

Specifically, Yadon and Crabtree’s study examines white individuals’ feelings towards police following exposure to news of a fatal police shooting. They designed a survey that presents participants with a fictional but realistic news report about a fatal police shooting. In one version the shooting victim is a black man, another reports that the victim is a white man, and in the third version the victim is a dog. Key information about the shooting remains the same across all three versions. A control story, unrelated to race or police shootings, was given to a control group for purposes of comparison with the three treatment groups. This experiment was conducted via Amazon’s Mechanical Turk (MTurk) platform, with 802 white participants. After reading one of the news reports, participants were asked a series of questions about their perceptions of the events in the article and about their attitudes towards police more broadly.

When asked whether they agree or disagree that police officers rarely abuse their power, the control group who had not read about a police shooting had a neutral response — about 0.49 on the 0 to 1 scale. Respondents who read about a white man or a dog being shot by police had a markedly different reaction. Participants who read an article about a white man shot by police had a 7 percentage point decrease in belief that police rarely abuse their power while those who read about a dog shot by a police officer had an 8 percentage point decrease. This is equivalent to survey respondents moving from feeling neutral about whether police abuse their power to a slight disagreement that abuse of power is rare after reading about either a White victim or dog victim.

Importantly, when white survey participants read about a black victim of a police shooting, it did not change their perception of abuse of power by police officers. Put differently, those who read about a black victim held views abuse police abuse of power that were indistinguishable from those who read the control story. The evidence suggests, then, that white respondents react more strongly to a police shooting if the victim is a dog than a black man. 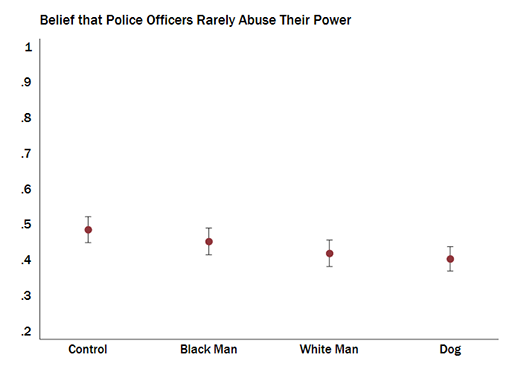 A separate set of questions focused on interest in varying forms of political participation following exposure to the news story. Do white people feel moved toward political participation in response to a story about a police shooting? First, the survey asked whether respondents would support a civilian review board to oversee the police department in their community. Those who read about a police officer shooting a black man or a dog were no more likely to support a civilian review board than the control group. However, those who read about the shooting of a white man were more than 7 percentage points likely to support civilian review in their community. 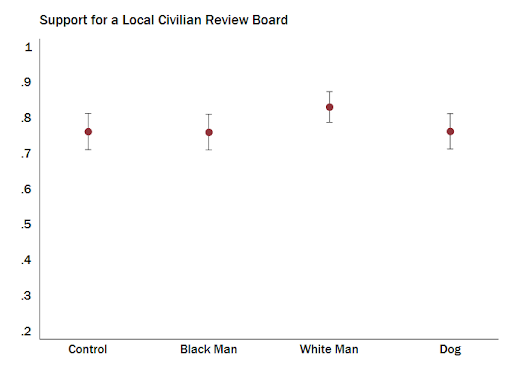 A second question asked about interest in signing a petition urging Congress to take action towards reducing excessive use of force by police. In contrast to the civilian review board question, levels of support for signing a petition were very low across all groups. In fact, white participants do not appear increasingly motivated to urge Congress to take action against excessive police force regardless of the victim’s identity.

Taken together, Yadon and Crabtree’s results suggest that exposure to a news story about a police shooting draws strong reactions from white people. Of concern, however, is that such reactions are largely limited to viewing either a white man or a dog victim. Indeed, across most of the items which measure attitudes towards police, there are no statistically significant differences when comparing the control condition with the black victim treatment. Such connections are increasingly important to study as cities move toward tightening oversight of police forces and many such initiatives are presented to citizens at the ballot box. Thus, the attitudes citizens hold about police are not only their own. The public’s opinion has potentially lasting effects for the future of policing in local communities.