ICYMI (In Case You Missed It), the following work was presented at the 2019 Annual Meeting of the American Political Science Association (APSA). The presentation, titled “Can Incidental Exposure to News Close the Political Knowledge Gap?” was a part of the session “News in the Digital Age” on Friday, August 30, 2019.

We’re immersed in a media landscape full of choices. News, information, and entertainment are all at our fingertips. But does this mean that people are better informed about important issues? Is it is possible for people who aren’t interested in seeking out political news to learn about candidates and issues through the information they’re exposed to casually? Brian Weeks, Daniel S. Lane, Lauren B. Potts, and Nojin Kwak conducted two surveys to answer this question.

Motivation and opportunity play a big role in the amount of news we’re exposed to. People who are deeply interested in politics are motivated to seek out information, and as a result, they are better informed about candidates and policies.

The nature of the media environment makes it hard to avoid news and political information; many people consume news without trying. As we have more access to all types of media, we are incidentally exposed to political information. Does increased accidental exposure make up for a lack of motivation to seek out news, or does all of that information rush past us without making us more knowledgeable?

To test whether this incidental exposure to news translates into an increase in political knowledge, Weeks and his co-authors conducted a series of surveys. They collected panel survey data two waves during the 2012 presidential election and conducted another two waves of surveys during the 2016 presidential election. The surveys asked participants about whether they were exposed to political information they didn’t seek out, their level of political interest, and measured their knowledge of candidates’ policy positions.

The surveys showed strong evidence that people who had incidental exposure to news about presidential candidates knew more about the candidates’ policy positions. 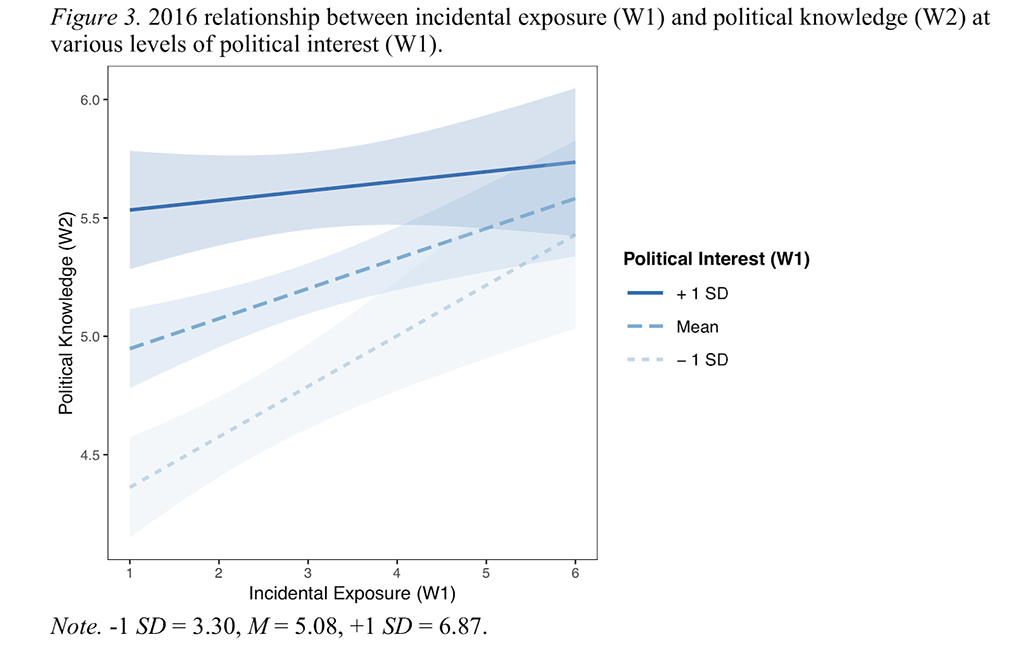 The biggest benefit of incidental exposure was seen in the group of people who rated themselves least politically interested, which suggests that greater exposure can make up for a lack of motivation to seek out news.

Knowledge of candidates and their policy positions is still essential for well-informed citizens, and the growth of opportunities to be exposed to news from many sources may reduce gaps in knowledge.