Perspectives on the 2020 U.S. Presidential Election

With less than two weeks to go before the 2020 U.S. presidential election, CPS faculty members Vincent Hutchings, Angela Ocampo, and Jenna Bednar discussed the issues that may shape the outcome of the election. You can view a recording of this event held on October 22, 2020 below.

Demographic Shifts in the Electorate

Vincent Hutchings outlined the demographic shifts that are affecting levels of support for each party leading up to the 2020 election. As the makeup of the voting population changes in terms of gender, age, and race, the base of each major political party also changes. Hutchings presented results from a recent New York Times poll, which shows the state of the campaign as of October 2020. A recurring theme in the poll results is that Biden is performing better in the polls than recent Democratic candidates, while Trump is performing worse in the polls than previous Republican candidates. 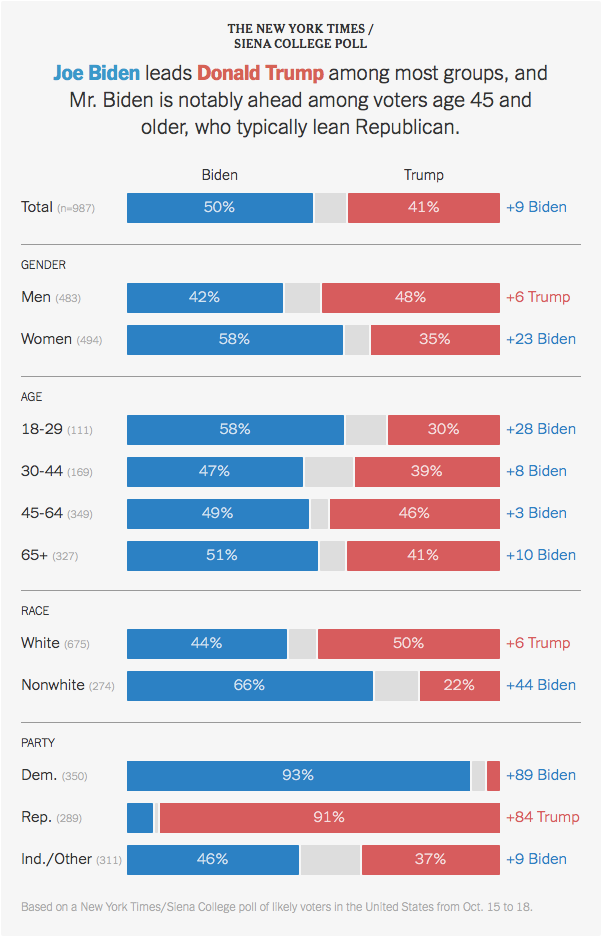 Women have been a strong democratic constituency since 1980. Unsurprisingly, Biden is polling well among women in the current election cycle, performing even better than Clinton and Obama did in 2016 and 2012, respectively. Trump is underperforming in polls among women. Whereas recent Republican candidates have received around 40% support from women, Trump is polling around 35% support.

Younger voters are increasingly supporting Democrats. This is in part because younger voters are more racially diverse than older voters. Republicans typically capture around 35% of the youth vote, but in this cycle Trump is receiving even lower levels of support. Among older voters, the news for Republicans is even worse. Older voters tend to turn out to vote in higher numbers than younger voters. They are also more likely to be white, a constituency that leans Republican. In the most recent polls, Trump is polling at only 41%, which is significantly lower than expected for a Republican nominee; Biden is over-performing compared to recent Democratic candidates.

In the United States, whites have leaned Republican since 1968 – even higher during the Regan years. Trump is only polling around 50% support among white voters. The base of the Republican party has been non-Hispanic white voters for several decades. That share of the population has been declining, with important implications for support for both Democrats and Republicans.

The Importance of the Latino Vote

Angela Ocampo added to the conversation about the changing and diversifying electorate, with special emphasis on the growing Latino population. The non-white elegible voter population have accounted for 76% of growth in the electorate since 2000, said Ocampo. Latinos account for most of this growth, contributing 39% of the growth in the eligible voting population. The majority of this growth comes from US-born citizens who are turning 18 and becoming eligible to vote. In the 2020 presidential election, Latinos are projected to be the largest minority group among eligible voters for the first time.

Ocampo demonstrated that the differences in the growth of the Latino population at the state level is important. The proportion of Latinos in the voting population has increased sharply in key states, like California, Nevada, Arizona, and Texas. The emergence of these states as battlegrounds is largely attributable to an increase in Latino voters.

Ocampo notes that a record 32 million Latino voters will be eligible to vote in the 2020 election. Latino voters will continue to be influential in future elections. The Latino vote has grown, and the real question is how successfully candidates will be able to mobilize these voters.

The view from the states

Even if you only care about the outcome of the presidential election, said Jenna Bednar, you should still care about what’s going on in the states and in down-ballot races. Why? The electoral process is a product of the states. States structure elections by managing voter registration, identification requirements, and polling hours. States determine the qualifications of candidates and draw legislative districts. The electoral experience itself is determined by decisions about ballot design and whether states hold caucuses or primaries.

States shape the way we vote, and therefore the outcomes we get. Bednar reviewed the case of the butterfly ballot design in Palm Beach County, Florida, which led to voter confusion in the 2000 presidential election. Instructions for voters were confusing, and it was easy for voters to make mistakes. Following the irregular voting outcomes that stemmed from that ballot design,  some people called for a standardized ballot. Bednar argued that slight differences in aspects like ballot design make for good experiments and innovation. She noted that ballots that are different in each state are not as easy to hack. Overall, these differences will rarely lead to problems.

Redistricting is a powerful way that states shape government at all levels. Bednar observed that Republicans have been more effective at drawing legislative districts to their benefit than Democrats. Democrats have been late to recognize the value of the states. Can we blame state governments for gerrymandering? Bednar said that while gerrymandering is not necessarily a good thing, you can’t blame a partisan process for having a partisan outcome. Many states, including Michigan, have adopted new laws to allow same-day voter registration, no-excuse absentee voting, and reforms to make the redistricting process less partisan. With all of this to consider, Bednar concludes that all voters should care about what’s happening at the state level, because the state laws and policies shape outcomes.