The impact of ANES on the careers of Goldenberg, Green, Jones-Correa and Philpot

Here we include comments from four prominent political scientists on how ANES has impacted their careers.

I used ANES data in several articles early in my career and relied on other findings based on ANES data for the book I wrote with Mike Traugott, Campaigning for Congress. I served on the Board for a while and enjoyed ANES founder Warren Miller’s retreats in Arizona during the cold Michigan winters. We always went out for authentic Mexican cuisine, which was terrific. I met a lot of colleagues through the ANES.

Scarcely a day goes by in which something I’m reading, debating, or studying is not in some way connected to ANES research.  My very first day in graduate school in 1983 featured a lecture by UC Berkeley Political Scientist Merrill Shanks on the insights gleaned from the four-wave 1980 ANES.  Today, decades later, I am about to run off to teach a class on political psychology, and our readings for this week include Philip Converse’s “The Nature of Belief Systems in Mass Publics” and Ansolabehere, Rodden, and Snyder’s 2008 American Political Science Review (APSR) article that uses ANES data to show Converse would have come to different conclusions had he used multi-item scales.

Working with the ANES and the ANES team has been both beneficial for my research and a real learning experience— particularly being part of the ANES advisory board. The intense discussion among the Primary Investigators (PIs) and board during our meetings had the best aspects of sitting in on a seminar on survey design and methods. The ANES itself has inspired me to be part of other survey data collection efforts– notably the Latino National Survey (LNS, 2006), with co-PIs Luis Fraga, John Garcia, Rodney Hero, Val Martinez, and Gary Segura, and the Latino Immigration National Election Survey (LINES 2012-2013), with James McCann. Both of these drew on, learned from, and expanded the scope of the ANES.

Tasha Philpot, Associate Professor of Political Science at the University of Texas – Austin:

I’ve utilized the ANES in almost all of my publications. The most significant point in ANES history for me was when Daron Shaw and I were able to secure National Science Foundation  (NSF) funding for the African-American oversample in 2008, a historic election. Using the African-American oversample, we were able to explore the determinants of black turnout in the 2008 election. 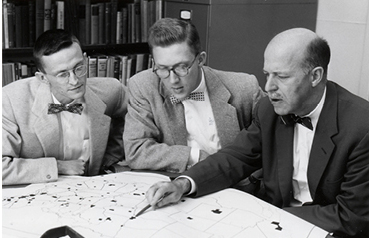 Contradiction, Triangulation, and the ANES

ANES: An accurate history of American politics as seen through the eyes of voters, says Morris Fiorina