What do Birthers have in common? (Besides believing Obama was born outside the U.S.)

The Birther movement contends that Barack Obama was not born in the United States. Even after releasing Obama’s short form and long form birth certificates to the public, which should have settled the matter, the rumors to the contrary continued. Some contend Obama was born in Kenya. Others argue he forfeited American citizenship while living in Indonesia as a child.

What drives these beliefs? 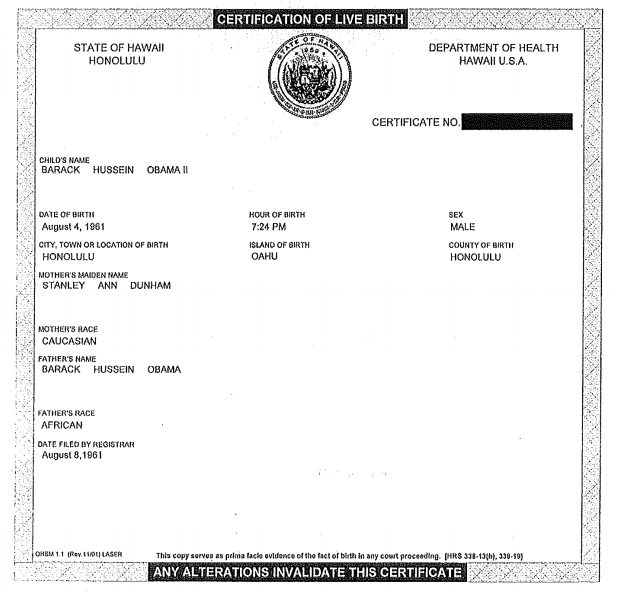 The researchers analyzed data from a survey conducted by the Associated Press, GfK, Stanford University, and the University of Michigan. The survey asked participants where they believed Obama was born. The survey also asked about political ideology, party identification, approval of the President’s job, and attitudes toward Blacks.

Further analyses revealed that Republicans and conservatives were more likely to believe Obama was born abroad. Likewise, negative attitudes toward blacks also correlated with Birther endorsement. Importantly, disapproval of Obama mediated the connection between both ideology and racism on the one hand and Birther beliefs on the other.

The authors conclude that, “Individuals most motivated to disapprove of the president – due to partisanship, liberal/conservative self-identification, and attitudes toward Blacks – were the most likely to hold beliefs that he was not born in the United States.” Put simply, the key feature of Birthers wasn’t that they were Republicans or that they held anti-Black attitudes, but that they disapproved of the president. It was this disapproval that was most closely associated with the willingness to believe that President Obama was ineligible for his office.

The full Electoral Studies article can be found here.