The fifth module of the Comparative Study of Electoral Systems (CSES)

The Comparative Study of Electoral Systems (CSES) project recently celebrated its 20th anniversary during a Plenary Session of collaborators in Berlin, Germany, with thanks to the Wissenschaftszentrum Berlin für Sozialforschung (WZB) for their generous organizational and financial support of the event.

At the event, 31 election studies from around the world made presentations about their research designs, plans, challenges, and data availability, with most of their slide sets being available for viewing at the Plenary Session website.

It was especially appropriate to return to Berlin this year, the city having hosted the initial planning meeting for the project 20 years previously.  The original event was sponsored by the International Committee for Research into Elections and Representative Democracy (ICORE).  Originally anticipated as an outgrowth of ICORE, the CSES grew and eventually replaced it. 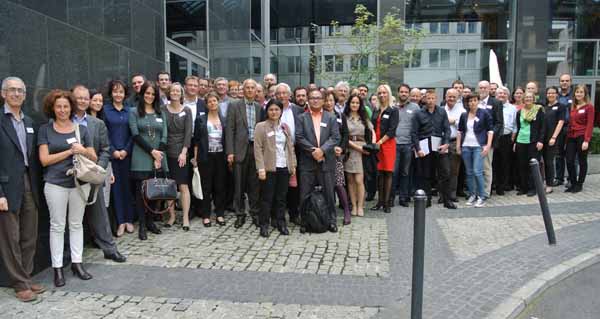 A CSES module consists of a 10-15 minute questionnaire that is inserted into post-election surveys from around the world. The project includes collaborators from more than 60 countries, with 50 election studies from 41 countries having appeared in the CSES Module 3 dataset. The CSES design is such that each module has a different theme which is intended to address a new “big question” in science. The project combines all of these surveys for each module, along with macro data about each country’s electoral system and context, into a single dataset for comparative analysis.  There is no cost to download the data, and there is no embargo or preferential access.  Every citizen in the world is able to download the data from the project’s website at the very same time as any of the project’s collaborators.

The recent Berlin meeting involved the first public presentation and discussion of content proposals submitted for CSES Module 5, for which data collection will be conducted during 2016-2021.  After a public call, 20 proposals in total were received – a record number.  Interested persons can view a presentation about the proposals, on topics ranging from corruption to populism to personality traits to electoral integrity.  The theme for Module 5 will be selected, and the questionnaire developed and pretested, over the next one-and-a-half years.  Prior modules have had as their themes: the performance of democracy, accountability and representation, political choices, and distributional politics and social protection.

As of the Berlin meeting in 2014, André Blais and the CSES Module 4 Planning Committee have handed over their role to a new CSES Module 5 Planning Committee, with John Aldrich as chair. John is an outstanding scholar who, in addition to having held leadership positions in many professional associations, has a long association with both the American National Election Studies and CSES.

While at its core CSES is a data gathering and disseminating organization, it has produced many other benefits as well.  CSES considers an important part of its mission to be to create a community for electoral researchers, and to encourage election studies and local research capacity building around the world.  CSES enables scholarship not just in political science, but other related disciplines – over 700 entries now appear in the CSES Bibliography on the project website.

The majority of funds for the CSES project are provided by the many organizations that fund the participating post-election studies.  The central operations of the project are supported by the American National Science Foundation and the GESIS – Leibniz Institute for the Social Sciences.

We’d like to thank our many collaborators, funding organizations, and users for their support of the CSES, and we look forward to developing an engaging CSES Module 5!