Josh Pasek said there are several ways that a scholar would look at the 2020 presidential election. One is looking at the structural features that set up the landscape in which the current election is taking place. Another is to look at the messaging that people are getting in the context of this campaign. Yet another is to think more broadly about the American political system and what that might imply. Pasek examined each of these perspectives in turn. 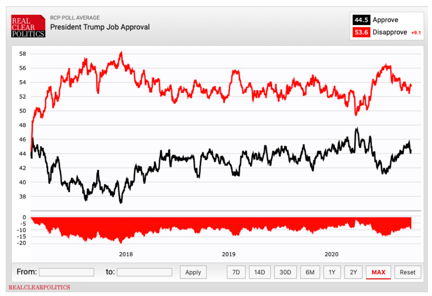 Pasek noted that there has never before been a U.S. president with a negative net favorability rating for his entire term, but this is true of Trump. A majority of individuals who have ever been asked whether they approve or disapprove of the president’s job have said that they do not approve. This is very unusual, said Pasek. Usually approval is strongly correlated with reelection chances, and an approval rate of 44 percent would not be associated with reelection. But it’s also an unusual way to target one-self as a sitting president, who typically tries to represent all the American people and to gain favorability among all of them.

The economic situation which is another of the major indicators to look at. The COVID-19 pandemic hurt the U.S. economy, and the economic growth in the last two quarters has been strongly negative. Pasek pointed out that strongly negative numbers tend again to be something that point against reelection of an incumbent president.

Pasek emphasized the incredible stability of polling in this election cycle. There has also been relatively stable attention to issues across the campaign. Pasek, Traugott, and Soroka contribute to a project called The Breakthrough, which asks people what they’ve seen, read, or heard about Biden and Trump over the past week. The survey has found that people are hearing essentially the same things about the candidates throughout the campaign. 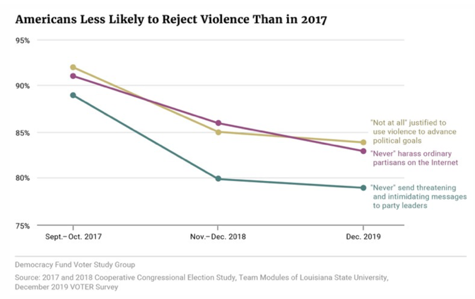 This moment in American Politics

Pasek suggested there is another story that needs attention, which is this moment in American politics. He said we are in a moment “where there is increasing animosity in American politics.” Tying this sentiment to an increasing erosion of key Democratic norms, Pasek said that Americans are less likely to reject political violence than they were in 2017.

There are also issues that are more concerning, Pasek said, such as questions about whether the president is willing to accept the election results or engage in a peaceful transition of power if he does lose the election. He points to evidence that groups have been recruiting people to show up at the polls armed, which could be sort of a widespread attempt at voter suppression.

“Maybe that all points to a situation where things are a little bit more abnormal, and we really do need to worry about whether the models are right, not just because the models sometimes have error, but because they’re actually is enough distrust in the system that people may work against it,” said Pasek. If we were looking at a normal election year, Pasek said he expect this to be a change election. People tend to be not particularly happy when they don’t like the president overall, and whether the economy is poor, and polling fits in line with that pretty clearly. But given some of these unique contextual features of the campaign, he concluded that it is hard to know how this election cycle will end.