News Coverage of the 2020 Presidential Election 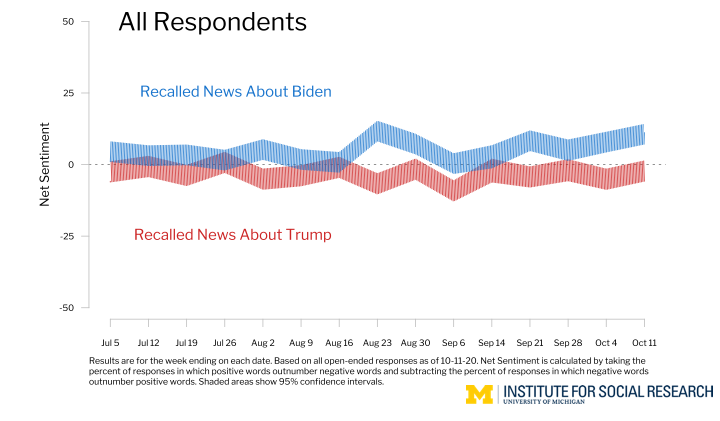 Sentiment of Recalled News about the Candidates

Amongst Republicans, Trump gets more positive recollections than Biden. Over the past month or so recollections of Trump have been a little more positive, albeit with a slight and statistically significant decline over the last month. Soroka said “That’s an interesting result because it runs contrary to what media observers might suggest. And contrary to what the Trump campaign’s own claims about negative coverage of Trump and mainstream media.” 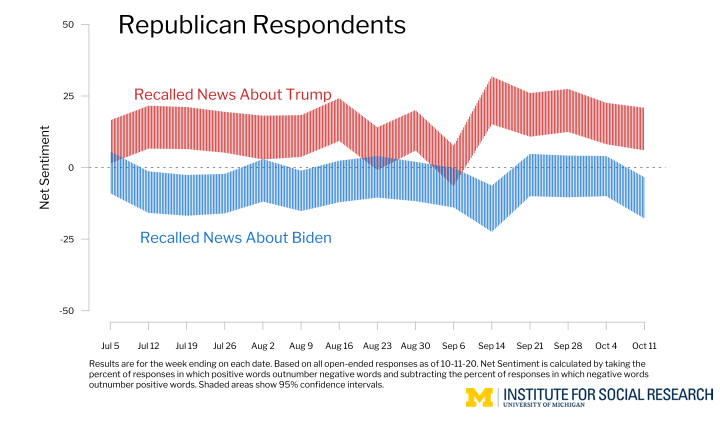 Sentiment of Recalled News about the Candidates

Next, Soroka focused on the impact of COVID-realted content on recollections of news related to Trump for Republicans, Democrats, and independents. The data show that as COVID-related content is associated with negative sentiment among Democrats, it’s associated with increasingly positive sentiment among Republicans. That trend is not just the product of Trump’s quicker recovery in the week of October 11th. It’s evident in weeks prior to that as well. “In short,” Soroka said, “partisans see the same information in fundamentally different ways.”

Switching to analyses of news content, Soroka showed data on the ratio of Republican candidate mentions to Democratic candidate mentions in the first week of September across 11 major newspapers for every election back to 1980. Incumbents get more coverage than challengers, and this has been equally true for both parties. We see this for Reagan, we see it for Clinton, we see it for Obama. That imbalance tends to be roughly a 20-percentage point gap. If there are ten candidate mentions, six of those are for incumbent, and four for the challenger. There are two outliers, first in 2016 Trump got incumbent style coverage in terms of imbalance although he was not the incumbent. After the election there was lots of discussion in the Academy, but publicly amongst journalists and the media as well, especially expressing concern that the media had focused too much attention on Trump. 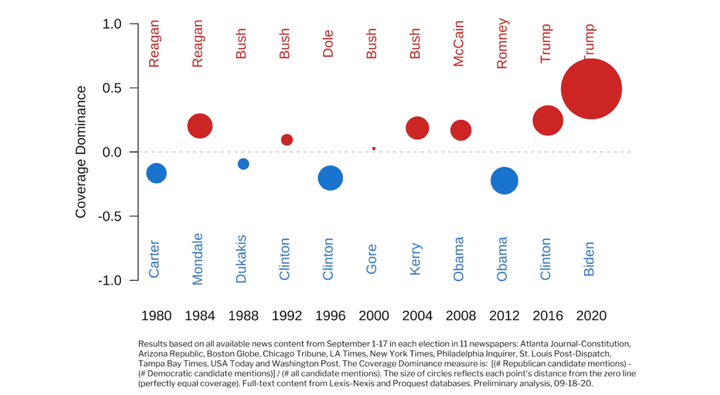 Now that Trump is incumbent, Soroka said that Trump is getting outsized proportions of coverage. This year, for every ten-candidate mentions, seven to eight of them are about Trump, and two to three of them are about Biden. Are there differences across newspapers? Soroka said these differences are relatively slight, and have barely changed over time. He also noted that public opinion data show that partisans see information in different ways; researchers cannot reasonably assume that coverage of Trump is viewed as negative or positive on average.

Overwhelming coverage of Trump makes it very difficult for citizens to learn about Biden. In other words, Soroka pointed out, “the nature of media coverage that I have just reviewed makes it possible for voters to decide on whether or not to vote for Trump, but it gives very little information that helps voters decide whether or not to vote for Biden.” The imbalance of coverage is evident across media outlets throughout this campaign, and at a rate that is roughly twice as large as we’ve seen for the last 40 years.

Soroka concluded by highlighting the areas in which the media can play a critical role in fostering the well-informed citizenry. He directed the audience to https://mediafordemocracy.org to find a set of recommendations on how to improve coverage of this election, as well as various possible outcomes of this election. Soroka is one of the signatories of an open-letter, signed co-authored and signed by more than 60 professors, at more than 40 universities.They hope this will be a useful resource for people interested in the role that media can play in American democracy both leading up to and following the election.